My simple suet pudding recipe has been very popular, so I wanted to share some more steamed pudding recipes that I often use. Puddings steamed in the slow cooker fit so well into our busy family schedule, and since this is really 12 recipes in one, it’s one I return to again and again.

There are many reasons I love this recipe – or recipes. All the different variations mean that it never seems like we’re eating the same pudding, whilst it’s really very simple and easy to make from store cupboard ingredients. My menu rotation usually just says “steamed pudding” and I can decide on the day which variation I feel like making. Serving it with cream, evaporated milk, custard, chocolate custard (just add cocoa to ordinary custard) or even ice cream for a treat, means it never feels like “this again”.

I make some of these steamed pudding recipes much more frequently than the others – Variations 1 and 2 are probably the ones I make the most. I don’t often make the lemon version as written, due to the cost of two whole lemons if you include the sauce. To be honest, the Foundation Recipe with a dollop of lemon curd is a pretty good way to go!

Another thing I love about this recipe is that it uses the “rubbing-in” method for the cake, meaning you don’t need a food mixer. I didn’t have one for years, and so have a good stock of recipes that avoid the “creaming” method. A friend of mine was delighted a few years back when I passed these recipes on to her while she was having her kitchen renovated – she had no oven or appliances, but all you need for this is a plug socket for your slow cooker and a couple of bowls!

Jump to the printable recipe

The real key to making this and any other steamed pudding recipe as quickly and easily as possible is using a slow cooker and a lidded pudding basin.

I have a plastic budding basin with a lid that I think I got in Lakeland. Okay, it’s plastic, but I’ve been using it for years, I’m never going to buy another one and I am not using greaseproof, foil and string every time I make a pudding. It fits neatly inside my basic slow cooker and it is such a time-saver.

If I had to use a stove top steamer, I wouldn’t make steamed puddings nearly as often as I do. A pudding steaming on the hob can’t be left alone while you leave the house, whereas I’m happy to leave the slow cooker on when I’m out – just make sure there’s plenty of water in it. Using a slow cooker also leaves the hob and oven free for whatever else you are cooking. And fiddling about wrapping a pudding basin with greaseproof, foil and string, is not something I have time for – especially since in the slow cooker the pudding sits in the water rather than above it, so you have to take extra care with wrapping to avoid a soggy pudding.

A real plus point for steamed puddings in general is that they cook for a long time so you have no last-minute faffing to do around meal times. You can attend to the rest of your meal and your hungry children. These puddings will come to no harm they are left a little beyond the stated cooking time, just make sure there is enough water in the slow cooker. If you have chosen a variation with a sauce, they can easily be made earlier in the day and reheated, or if you’ve forgotten or things just aren’t going to plan, just stick a pot of jam and/or tin of evaporated milk on the table, and it’ll be fine!

Here is the recipe breakdown – scroll down for a printable version.

Fill and boil the kettle. Put a little hot water in the bottom of the slow cooker and start pre-heating it on High whilst you assemble the pudding.

Butter the pudding basin and lid.

Sieve the flour, baking powder and salt together into a medium to large bowl. I very often use self-raising flour instead of plain flour, and if you do this, omit the baking powder.

Rub the fat into the flour mixture. I use butter if I can for a better flavour, but margarine works fine.

Stir in the sugar. It doesn’t matter if you choose caster sugar, granulated sugar or light soft brown sugar – I have used all of these or a mixture with success, the result is just a slight difference in flavour. I also usually have vanilla sugar on hand (I keep caster sugar in an old coffee jar with an ancient vanilla pod) and you can use a little of this to add a vanilla flavour to the pudding if the variation you are choosing would suit it – Version 2 (Chocolate) works well with a little vanilla sugar.

If you are making one of the Variations, you will probably have other ingredients to add at this point.

Next in a small bowl or jug, beat an egg along with 1/4 pint of milk. Whole or semi-skimmed milk both work fine – I’ve never tried it with non-dairy milks, but I don’t see why it wouldn’t work.

Mix the wet ingredients into the dry ingredients. It makes quite a wet batter.

Pour the batter into the pudding basin.

Cover the basin with a lid, or if you’re using a traditional pudding basin, cover it in greaseproof then foil in the usual way. If you are doing the latter and you are ‘steaming’ in the slow cooker, where the basin is in contact with the water, rather than a in stove-top steamer where it isn’t, it is better to wrap the foil around the basin from the bottom up, rather than top down as you probably normally would. This prevents water getting to the greaseproof, which (depending on the greaseproof) then wicks up and on to your pudding.

Cook for 2 hours on High (or simmer for the same length of time in a steamer) but no harm will come to it if it has to stay in for a bit longer. If I’ve made the variation with jam in the bottom in particular, I often turn the cooker off when I’m dishing up the main course of our meal, so that the jam is not horrifically hot when I come to serve it.

When you are ready to serve, remove the pudding and turn it out of the basin on to a plate. You may need to run a flat-bladed knife around the sides of the pudding to release it.

If you’ve chosen one of the steamed pudding recipes with a sauce, either pour it over the top of the pudding before serving, or (as my family prefers) put the sauce on the table for people to help themselves.

This is the Foundation Recipe, served with raspberry jam sauce

This is Variation 6, with mixed dried fruit.

This is Variation 1, with strawberry jam and custard.

This is Variation 12, made with brown sugar and walnuts. 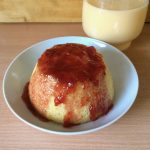 12 Steamed Puddings from One Recipe

You can cook this pudding in a stove-top steamer, wrapping a ceramic pudding basin in greaseproof and foil in the traditional way.