A few more thoughts and pictures from our Lego Week. (See my Lego Week 1 post). It turned a bit incoherent towards the end, to be honest, due to all the other clubs and visits we had on. I wish we could have done it outside term time as originally planned. But hey ho, the kids had fun!

One of my favourite bits was learning about different brick bonds used in real bricklaying. Occasionally you come across a Wikipedia entry that has been written by a consummate expert: complete, clear and a pleasure to read. The Wikipedia entry on Brickwork is one such.

We have been looking at the walls and buildings around us with more interest ever since. I let A borrow my phone to take some pictures on a walk, and he was particularly pleased with this shot, showing a garden wall in English bond, with a row of rowlocks on top, and a house in stretcher bond behind! 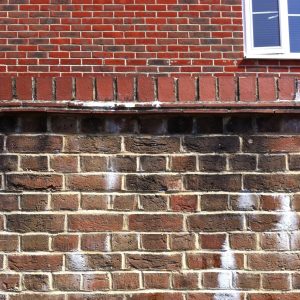 Guildford Cathedral is a great local example of the beauty of brickwork (monk bond) with which the kiddies were already familiar.

Since we’ve increased our supply of roof bricks, we’ve also all been paying more attention to how the planes of real house roofs intersect – ordinary houses have some quite complex geometry!

Other things we did included work on estimation and measurement using Lego bricks. 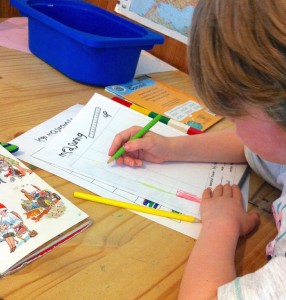 A’s lapbook is the biggest he has ever done. Making it all on the easy side helped with getting him to actually stick with it to the end, which was something I was keen to have him do.

I imagine we’ll be doing a Lego Week every year for the foreseeable future – it lends itself very easily to so many topics of study.